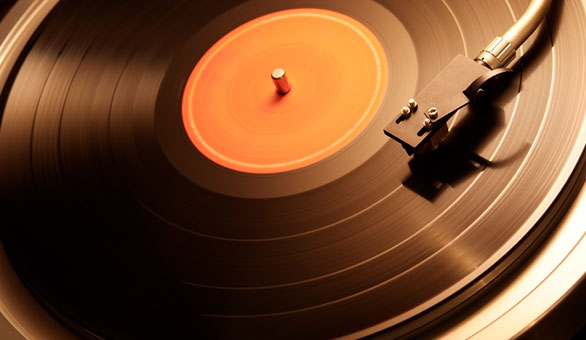 This post is part of our 10 Year Celebration. Stay tuned every month for fun posts, like this one, contests and more!

It's hard to believe that 2013 is already here. It seems like only yesterday that the MP3 player made its debut and Napster took the world by storm. But it wasn't yesterday — it was more than a decade ago.

Today, we're glued to our smartphones, social media accounts, streaming video, and tablets. Information is — literally — at our fingertips 24/7. We're able to enjoy today's media trends because 10 years ago, some of the top tech minds decided to build some cool inventions — and those somebodies deserve big high fives.

As part of our 10th birthday we’re taking a look back at what the world looked like in 2003 when our company was founded. Here are some of the things people were talking about in 2003.

In October 2003, a young college student created a photo-based social network out of his dorm room. In its first few hours online, that network attracted hundreds of visitors and tens of thousands of pageviews. The site was shut down after a few days by the college's administration due to breach of security, copyright violations, and privacy protection issues. But the college student didn't stop there. He kept coding and coding and ultimately launched what is now Facebook. Ten years later, that dorm room project is a public company as the Internet's top social network, and that young programmer is now running one of the world's most powerful businesses.

Well not really the flu shot itself, but in 2003 we were introduced to a great alternative to the vaccine. For those of us who might be shot adverse, FluMist, a nasal spray, was approved by the FDA in June of 2003. FluMist is still available today, although it’s not recommended for everyone and costs more than the regular shot. Need a conversation starter this flu season? Throw out the fun fact that this alternative is 10 years old and the vaccine itself has been around for over 60 years!

Believe it or not, 2003 was the year that camera phones took off. The trend wasn't just a fancy way to take photographs either — they sparked a new way for people to engage with each other. Time magazine suggests that this technology invention is as profound as the Internet.

'Like the Internet before them, camera phones open up a new and surprisingly spontaneous way to communicate,' wrote Anita Hamilton for Time magazine.

Today, camera phones are more than just cell phones. They're smartphones. You can even film high definition video captures that you can instantly upload online to share with friends and family.

Canon's Digital Rebel revolutionized the world of online photography. While the DSLR has been around since 2000, the very first Canon DSLR entered the market back in 2003. It was one of the very first to enter the consumer market with an entry level price point of under $1,000. Today's DSLRs have evolved to feature advanced functionality including touch screens and video recording.

Now practically standard on almost all luxury vehicles, back in 2003, Toyota introduced the initial version of the Intelligent Parking Assist System (IPAS). The technology was originally developed for the Japanese market’s hybrid Prius but was soon after introduced to the luxury Lexus models. Cars enabled with IPAS offered drivers assistance in parking their vehicle, with an in-dash screen and controls, the car parks itself with little input from the driver. It’s scary to think, but today, with Google’s driverless car, this technology seems almost dated!

If you think that Facebook was the original social network, guess again. If you think MySpace was the original social network, you're still wrong. Believe it or not, the phenomenon started with a platform called Friendster where users could share videos, photos, messages, and comments with fellow members. In 2003, Google approached Friendster with a buyout offer that was declined. Friendster is still around today as a social gaming platform with millions of registered users in Asia and Africa.

Although it was launched in 2001, 2003 brought the real buzz with the launch of Xbox Live, which redefined how people played games together online through high-speed Internet. Xbox live enabled teenagers from all over the world to trash talk each other with no boundaries. The Xbox product family dominated the market through 2005 when its successor, Xbox 360, entered the market. Hold onto your seats, there’s rumors about a new Xbox debuting later this year.

The robotic room cleaner that we know and love made its debut in 2002 and became increasingly popular over the 2003 holiday season. Over the last decade the manufacturer, iRobot has ironed out a number of kinks and introduced a range of feature updates including a scheduler, HEPA filter, recharging dock, and longer battery life. If you're feeling adventurous, you can even hack your Roomba to make it draw a Spirograph.

It's hard to imagine the Internet without Wikipedia. But that's exactly what the Internet was back in 2001. Today, Wikipedia is one of the most valuable online destinations with billions of monthly pageviews. Millions of users rely on Wikipedia and fuel the project's momentum through open collaboration. In 2003, Wikipedia was available in 46 languages. By 2004, that number had grown by about 4 times to 161. There are more than 35 million registered users today.

The iPod itself debuted in 2001, but in 2003, Apple transformed the music industry with the introduction of iTunes. Today the iTunes store hosts more than just music and offers TV shows, movies, audiobooks and more. Also, with advancements in Apple’s technology, iTunes is now available on the iPad, iTouch and iPhone, in addition to the iPod.

Did we miss anything big from 2003? What technologies from the past decade are you still using today?