by Allison Canty — Published in Virtual Office on September 22, 2011

The phrase “virtual office” probably makes people think of working from home, checking email on their smartphones, and video conferences over Skype.

According to Andrew McAfee, that’s really only half the picture. When you consider how central work is to human life, and how even the idea of an “office space” is changing dramatically, you can see how there’s a more interesting story to tell.

Andrew McAfee is the principal research scientist at the Center for Digital Business at MIT’s Sloan School of Management, and the person who coined the phrase “Enterprise 2.0”.

In a recent article for Technology Review, McAfee described how big productivity gains will come from broader and better use of social networks, data analytics, and smarter technologies like voice recognition and optical readers.

An overhaul of the entire idea of work is coming, and McAfee bets he has a pretty good idea of what this new office space will look -- and feel -- like.

In the spring of 2006, McAfee (who was then with the Technology and Operations Management Unit at Harvard Business School) wrote an article in the MIT Sloan Management Review about his research covering a European investment bank. The groundbreaking article was titled “Enterprise 2.0: The Dawn of Emergent Collaboration.'

McAfee was probably the first person to fully realize how powerful wikis, blogs, and group messaging solutions, which the bank had just started using, could be for building a truly collaborative digital platform like never before.

While McAfee was dismayed in 2006 by the poor state of collaborative enterprise technology, a great deal has changed since then.

Now knowledge-intensive organizations can depend on “industrial-strength” blogs and microblogs, social-networking software, and wiki-style tools that favor collaboration without constraining it.

As McAfee explains, these tools “give individuals a voice, allow groups and communities to form easily and spontaneously, and help knowledge both accumulate and spread.” He feels such tools will radically change the way we think of office work in the coming years.

Even with the flurry of change, he notes two particular qualities of an office that seem to be especially enduring.

Second, and more importantly, the water cooler is still a very important piece of equipment. Humans are social animals and depend on the office as a place for social interaction and collaboration.

As the virtual office revolution continues to disassemble the office space and fling digital pieces off to be tackled elsewhere, finding a robust (digital) space for collaboration will become ever more important.

But up until now, the virtual office revolution has not flung those pieces far enough, or, at least, not as far as some would have hoped to see. As McAfee observes, the IT-driven productivity gains within the office have actually been rather modest when compared to manufacturing.

However, this is likely to change, and soon. Better technologies allow for better collaboration and free up more people to do more complex tasks.

How is Technology Changing the Way We Work?

Manufacturing is the classic example, but McAfee goes much further. He considers how people deal entirely with computers when making an airline reservation, buying a product and arranging a delivery, or troubleshooting a problem for a device they own.

But up until now, machines have only been able to handle simple, predictable forms of communication.  Advancements in artificial intelligence, voice recognition, and automatic translation are poised to break that glass ceiling.

McAfee points to IBM’s Watson supercomputer’s Jeopardy! victory as only the beginning. Intelligent automation could replace even more complex human labor, possibly even doctors. (The debate over Dr. Watson and his bedside manner is still ongoing.)

Future customer service agents and doctors would be free to do more complex, knowledge-based work. Office-based productivity could potentially skyrocket to a “striking” level.

Of course, such huge gains are rarely acquired effortlessly, and the risks and challenges are notable. 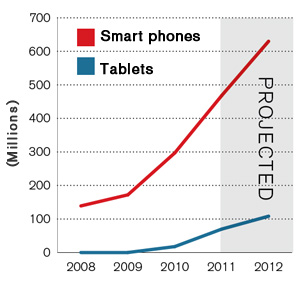 Current smartphones and tablets let people work from anywhere, but companies fear the security risk when their devices can travel everywhere and access potentially unsecure connections. Until these device manufactures can solve the security-mobility question, McAfee sees the full potential of the distributed workforce still in the waiting.

Getting people to adapt to new technologies and new methods is another formidable task. At the Enterprise 2.0 Conference in Boston, McAfee warned of “old-fashioned bosses and newfangled computers.” These managers don’t appreciate Enterprise 2.0 solutions at all, wanting work done the “ancient” way while throwing in a supercomputer to say it’s modern.

But in the end, no matter how many tablets or Watsons your office may have, your company will still only be as good as the people behind it.

Technology might shrink the number of people needed to run an office, but McAfee is confident that businesses will need those people more than ever.

this story is in Virtual Office with helpful hints for your entrepreneurial journey.