Clean vs. Messy Desks: What Does Your Style Say About You? 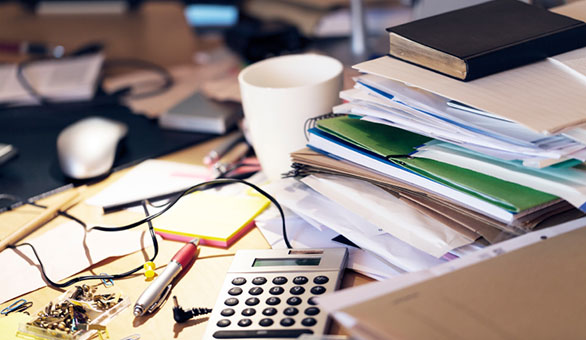 You have a style. You just don’t know it yet.

Sure, you’ve labored over the choice of a light autumn jacket. Or maybe you’ve perused the Internet many a late night, wrapping your noggin over the quandary of which pair of work boots best expresses your taste in, well, work boots.

But as it turns out, the clutter on your desk (or lack thereof) may have just as much to say about your personality as the deepest of your consumer choices.

A number of intriguing and eye-opening studies into the world of clutter have revealed that your leftover bottle of Coke Zero or mishmash of half-completed doodles can have a powerful effect on your behavior. If you prefer a tidy desk and an ordered office, that too can spell changes in personality that even you haven’t been able to detect.

It should come as no surprise, then, that the effects of a tidy desk and a messy desk are not the same. They come with both advantages and disadvantages, positives and negatives — and each of these can have a major effect on your work performance.

Admit it: having a clean, newly-tidied desk is a pleasure something on par with taking a relaxing shower. You feel refreshed, reenergized, and, on a psychological level, perhaps even clear of conscience.

That’s not a coincidence. Tidying up your office and even your desk could have an effect on the tidiness of your psyche.

How is that possible? It starts with our concept of what constitutes order. A 2014 study in the Journal of Consumer Research found that most people equate tidiness with border maintenance. For example: even if a piece of cheese was put away in the cupboards, if it wasn’t where “the cheese is supposed to go,” the feeling of being tidy was not preserved.

But perhaps more interesting, one respondent even reported feeling ashamed when someone else cleaned her cupboards for her, thus ending the perception of being organized. The researchers concluded that keeping one’s things in order isn’t just about cleanliness, but something with its own “cultural meaning.” As the New Republic pointed out about the study,

Tidiness, the researchers concluded, reinforces the structure of social reality and the moral order.

Washing Away More Than Dirt

Ever do something you later regretted and found that the simple act of taking a shower made you feel a little better about yourself?

Sure, it feels physically good to be clean, but research suggests an underlying psychological effect that helps you feel spiritually clean as well. A 2006 study in “Science” found that…

_Daily hygiene routines such as washing hands, as simple and benign as they might seem, can deliver a powerful antidote to threatened morality, enabling people to truly wash away their sins. _

The report found that the act of physically cleaning yourself did indeed help people deal with their perceived unethical behavior. Any threats to a moral self-image were also dealt with during the physical act of cleaning. The researchers pointed out that cleansing rituals have been part of religious ceremonies for some time—and it appears there’s good psychological reasoning behind this.

It’s not a stretch to suggest that an orderly office and an orderly desk can have similar effects on your psyche. And that’s exactly what the research is coming to suggest.

Cleanliness and Godliness: Not Just a Quote Anymore

Gandhi was famous for having said that “cleanliness is next to godliness.” Perhaps some sort of deep-seated moral truth in the statement has allowed it to stick around, because researchers are finding that perceived cleanliness actually can help people make more virtuous choices.

In a report called “The Smell of Virtue,” researchers conducted an interesting experiment: they put volunteers in different rooms: one clean-scented, the other “baseline.” These subjects were then subjected to a test: they played an anonymous “trust game.”

The rules of this game were that there were two participants, a “sender” and a “receiver.” The sender could decide how much money to send the receiver, which would then be tripled. The receiver would then decide how to split the tripled money, and whether to return any of it to the sender.

In this experiment, the researchers told each subject that they were the receiver, and that they were given $4, tripled to $12. They were then asked how much to share with the sender. The interesting finding: people in a clean-scented room returned more money.

In a different experiment in the same study, participants in a room with freshly-cleaned windows also decided to send more money to charity.

Reading all of these studies, it would be easy to conclude that keeping a tidy desk suggests that you’re a compassionate person who believes in some sort of moral order or structure.

But what if there are advantages to a messy desk as well?

Advantages to Both: a University of Minnesota Study

A study by a researcher at the University of Minnesota found that people with clean bedrooms were more likely to donate to charity—something that jives well with the studies listed earlier on. But there’s more to the story: the people who kept untidy rooms were able to come up with creative solutions to hypothetical problems.

“People in the messy room are more creative,”’ says Kathleen Vohs, one of the researchers. “Cluttered minds can lead to all kinds of pathways and solutions.”

Vohs’ findings were in alignment with the idea that tidiness helps promote a sense of social order. Said Vohs: “When people are in a tidy room, they seem to perform behaviors and make decisions that go along with what's expected.” So it makes sense that those with a messy desk are able to think more creatively and find more unexpected, innovative solutions.

Authors Eric Abrahamson and David H. Freeman, who wrote “A Perfect Mess: The Hidden Benefits of Disorder,” believe that there are other hidden benefits to clutter. Their argument? The time spent on maintenance, cleaning, and organizing is all just arbitrary, and not worth the labor.

Considering how the first study in this article showed that concepts of cleanliness had a cultural angle to them, they may be onto something. Especially if you don’t mind a little clutter on your desk every once in a while.

Which Kind of Desk Are You?

Take a look at your desk and ask yourself where you fall on the spectrum — a little outside the box, a little willing to get creative and ignore some of the rules; or someone who believes in order and efficiency, and that cleanliness is indeed next to godliness.

Your desk says more about you than you know. And if you want to change your approach, the next step may lie right in front of you.

Do you believe a messy desk is the key to creativity? What's your desk look like? Please share in the comments below!