The Grasshopper Re-Brand: How We Did it and How It Went

Grasshopper, formerly GotVMail, provides Advanced Phone Numbers to tens of thousands of entrepreneurs across North America. The company was founded six years ago by Siamak Taghaddos and David Hauser and re-branded itself in May of 2009.

In order to generate buzz, increase awareness of the new brand, and inspire entrepreneurs, the team at Grasshopper launched a multi-sensory marketing campaign. The campaign consisted of a unique direct mail piece sent to 5,000 of the most influential people in North America and included a link to an inspirational video about the power of entrepreneurship.

The total cost of the campaign was $68,103 and included production of the YouTube video by a freelance creative strategist and motion designer, as well as creation and production of the direct mail piece, and the labor and research tools used to find the mailing addresses for the recipients on the “5,000 List” (Appendix A, Campaign Costs).

GotVMail’s founders had spent six years empowering entrepreneurs to sound professional and stay connected to their customers. Grasshopper would continue to deliver on those promises, but with the pending launch of several new service offerings, they wanted to communicate that they were still dedicated to empowering entrepreneurs.

The second challenge was developing a direct mail campaign so remarkable that recipients would have no choice but to tell their networks about the package they had just received. In order to do this, they targeted 5,000 of the most influential politicians, business leaders, journalists, authors, and bloggers in North America. They scoured the online world, social media, business press, newspapers, and magazines to build the mailing list.

They chose to send each person five chocolate covered grasshoppers, which reinforced the Grasshopper brand and were controversial enough to spark conversation. They scoured the U.S. for a sustainable grasshopper farm that could supply grasshoppers that were fed natural foods and in large quantities. Once a supplier had been identified, they began sampling the different types of green chocolate with which they would coat the grasshoppers.

The out-of-box experience and delivery method were also carefully considered. The goal was to entice influencers and make them feel as if they were part of an exclusive group of recipients. FedEx was selected as the carrier for shipping all 25,000 grasshoppers. The team reasoned that a FedEx shipment would appear more urgent to a recipient, and therefore increase the “open rate,” than if they were sent through regular mail.

Once opened, the FedEx envelope revealed an understated—but branded—glossy white bag with a hangtag attached. The hangtag featured a URL that directed recipients to a landing page for the aforementioned inspirational video. The copy on the packaging appealed to the “risk-taking” spirit of entrepreneurs. It also urged them to take an unconventional risk and try a chocolate covered grasshopper. It’s important to note that there was no letter inside the FedEx package. Recipients who opened the package had no choice but to read the tag, visit the URL, and find out why Grasshopper had sent them the package. Including the cost of packaging and delivery, the final cost was $9.46 per piece (Packaging & Delivery Costs, Exhibit A)

The final component of the campaign was a brilliant, animated kinetic typography video embedded into the landing page found on the package of grasshoppers. The video, featured on both a Grasshopper website landing page as well as YouTube, drew on the historical evolution of entrepreneurship, and suggested that entrepreneurs had the power to serve as innovators. The goal was to show people that entrepreneurs had surmounted obstacles in the past, and therefore, they could overcome any obstacles now

The creative strategist and copywriter behind the project devised a structure for the video that would draw the viewer in by posing a question, and then providing an answer in the form of a story. The video began with the question, “Do you remember when you were a kid… And you thought you could do anything?” and then proceeded to tell the viewer that the hope possessed as children is renewable as an adult, and as an entrepreneur. The video used an inspirational song, created by Carly Comando, and clever kinetic typography animation to retain viewers, and ended with an inspirational message to current and would-be entrepreneurs to essentially seize the day

As the packages were being opened across North America, the team saw an exponential increase in the number of views on the YouTube video. At its peak, the video experienced over 8,000 views per day (Exhibit D, YouTube Views). After creative strategy, copywriting, design, development, and music roduction, the video cost Grasshopper $18,708 to produce (Exhibit B, Video Production).

The number of people using Twitter to share that they had either received the package themselves, or knew someone who had, increased with the spread of the video and it became viral (Exhibit D, Twitter Mentions). Major influencers like Guy Kawasaki and Kevin Rose “Tweeted” about the effectiveness of the campaign, sharing the story with over 875,000 of their immediate followers. Needless to say, there are countless others who “re-Tweeted” the information from these influencers, and the information spread like wildfire.

During the period of time following the mailing, the team at Grasshopper began receiving hundreds of unsolicited videos ad images of people eating the grasshoppers, or trying to convince others to do so. This user-generated content provided the impetus for the final leg of the campaign: using the “buzz” o pitch to news outlets across the country

By providing examples of what other people had done with their shipment of grasshoppers, the Ambassador of Buzz at Grasshopper was able to entice two news anchors to eat the grasshoppers live, on air, and many, many others to blog about the effectiveness of the campaign (Exhibit F, Blog Posts).

The campaign was a success because it touched upon all of the human senses, capitalized on people’s natural curiosity, and connected with them emotionally. By eschewing typical direct mail marketing practices and not including the traditional “informational letter” with theFedEx mailing, Grasshopper forced people to use the web and social media to find out how nd why they’d been selected as a recipient of such an unusual parcel. By driving people to a powerful online video, the team only further strengthened the connection between the campaign and the online world, where guerilla marketing tactics like these have the potential to grow exponentially. This opened the flood gates for interaction and dissemination of the video across social media sites, and intrigued even those individuals who did not receive the mailing, thus increasing its reach. Together, these events solidified Grasshopper’s re-branding and marketing campaign as one of the most successful ever. 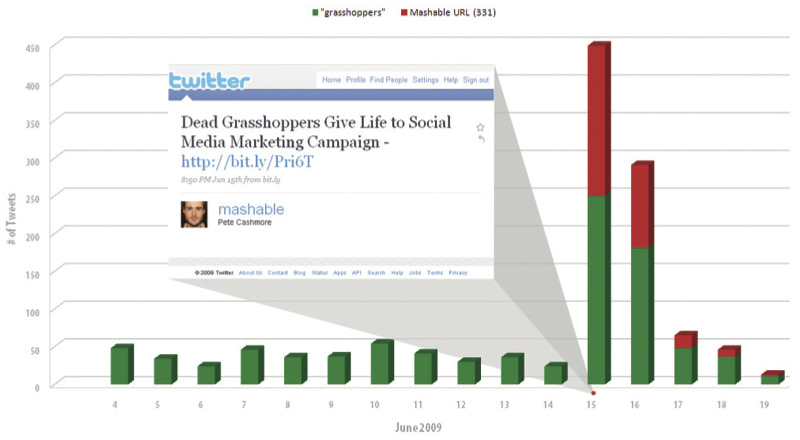