by Kiera Abbamonte — Published in Getting Started on September 29, 2014

In 1863, a baby boy was born on a farm in Michigan. That baby would grow up to masterfully repair watches, invent 'Fordism' (producing tons of inexpensive goods while paying workers well), and then build an empire based on assembly lines and mass production.

Henry Ford's success isn't just a story in a history book. What he did was built on a strong foundation of good business practices. Everything from how he treated his customers to his management of employees contributed to the rise of Ford Motor Company. 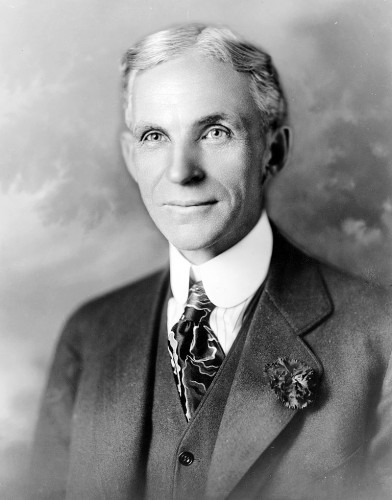 It’s been a while since Ford was in business, but his strategies and the lessons drawn from them are still super relevant in today’s business world.

“If I had simply asked people what they wanted, they would have asked me for faster horses!” – Henry Ford

Knowing your target market goes much deeper than simply knowing what they want. Ford believed in offering his customers solutions to problems they didn’t even know they had.

Henry Ford knew he was going to build an automobile. Before he built it, though, he conducted extensive research on who would buy it, how much they could afford to pay, and what they would want and need in a car.

By the time the Model T was introduced, Ford already knew he had a large market of potential buyers, what features would make the buy, and what to charge them.

“It has been my observation that most people get ahead during the time that others waste.” – Henry Ford

From mass production via the assembly line to economical personal effort, Ford and his company were captains of efficiency.

When Ford introduced his assembly line at the first Michigan plant in 1913, his production of the Model T doubled. Without hiring additional labor or skimping on quality, this feat is huge!

The improved production allowed Ford to drastically increase the affordability of his car, dropping the price from $800 to $350, and increase his employees’ wages from $2.34 to $5 a day without hurting his bottom line.

“Quality means doing it right when no one is looking.' – Henry Ford

When you’re excited about your product, it can be easy to find yourself in a rush to launch. But to be really passionate involves a lot of due diligence.

Ford insisted that if his name was gonna be on the company, the brand would stand for quality. He wanted to be 100% confident in his automobiles before they were sold.

Ethics aside, good quality is just plain good business, and it shows. Ford Motor Company was the #3 automobile manufacturer within a few years of its launch.

4. Nothing Is Particularly Hard

“There are no big problems; there are just a lot of little problems.”

No matter what it is, nothing is truly that hard. There’s no task so big that it can’t be broken down into smaller, more manageable parts.

Ford said, “There are no big problems; there are just a lot of little problems.” And that’s the philosophy by which he ran Ford Motor Company.

Instead of thinking about launching an entire business, Ford took it one step at a time. First thinking about developing the product, then pricing, followed by advertising.

'There is one rule for the industrialist and that is: make the best quality goods possible at the lowest cost possible, paying the highest wages possible.'

This is a big one. Happy employees will make #2 and #3 seem like a piece of cake, and there are a lot of ways to go about it. Generally, compensation, workplace culture, and sense of belonging are the huge factors that affect employee satisfaction.

Ford knew his workplace culture was what it was. Factory work is hard to make engaging and sexy. What he did to remedy this was unheard of in his time; he doubled the salaries of his workers.

The effect of this was two-fold. Obviously making more money makes employees feel happier about going to work. It also allowed most Ford employees to actually be able to afford a Ford automobile, which increased their commitment to their jobs.

Take What You Need

The lessons we can draw from Henry Ford and the way he ran Ford Motor Company have clearly stood the test of time. No matter what industry or stage of business you’re in, these are important lessons that will help you optimize your business for today’s marketplace!

**Your Turn_:_ **Which lesson do you think is most relevant today? Share with us!