How to Finally Measure Your Offline Conversions Once and For All

Phone calls don't come out of the blue.

There was a spark – a catalyst.

And yet most companies have no idea where, specifically, they're coming from. No way of tracking performance and measuring their return.

Here are a few techniques to recover this lost data, discover what channels are driving your incoming phone calls, and fix your marketing campaigns to drive more.

Don’t look now, but direct mail is making a comeback. Incredibly, 60% of direct mail recipients do the exact same thing when they receive a new piece of mail: visit the website. We’re not just talking cheap coupons to consumers, either.

Direct mail is also making a comeback as a way around the proverbial gatekeeper inside big organizations. For example, one agency is targeting companies that make over $30 million a year and seeing a 25% response rate.

Not impressed? Compare that to the alternative, like cold calling, which only nets a measly 1% response rate. Spending a few bucks on extra postage this month now sounds like a pretty good idea.

There’s only one problem... how are you going to track that investment?

Sure. People walking into your office is a good sign. The phone ringing is also helpful. But short of an interrogation, you have no idea where these people came from (or more importantly, which of your efforts drove them there).

Let’s keep it simple and focus on a website URL.

For starters, you’d like to at least get some kind of extra UTM code on them. These ‘parameters’ are like extra information tagged onto the end of a URL, so you know exactly what sent that person to your site. 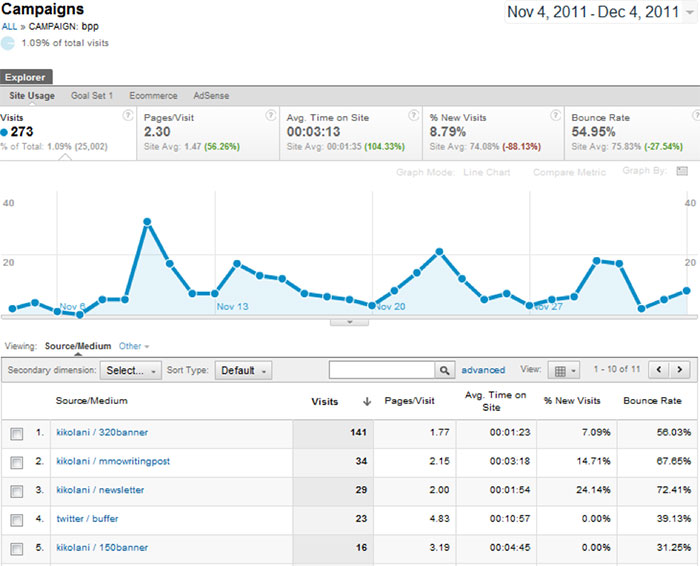 Google is even kind enough to provide their very own UTM builder that will take away all of the manual labor.

But let’s put this back into context for a second. No one’s going to open a piece of direct mail and then type out a URL that looks like:

So, let’s look at a workaround. You can buy memorable domain names, like:

That’s easier to remember. Then you can redirect that domain to your new UTM-code in order to properly track visits it generated.

Good. But not great.

After all, Los Angeles is massive. Papering the streets of LA would be incredibly expensive! You’d at least like to know which locations within are generating results (vs. those that aren’t). Or you’d like to see which types of companies are generating more leads (or not).

So you can split that up a few ways. You can use domains like:

Or you can even get more sophisticated by also spelling out different service types. For example:

This is getting confusing. Now you’ve got all of these sub-sets to track. And besides, if people are coming from different locations or wanting to view different software types, you can’t send them all to the same page. Each campaign or group will need their own page now. 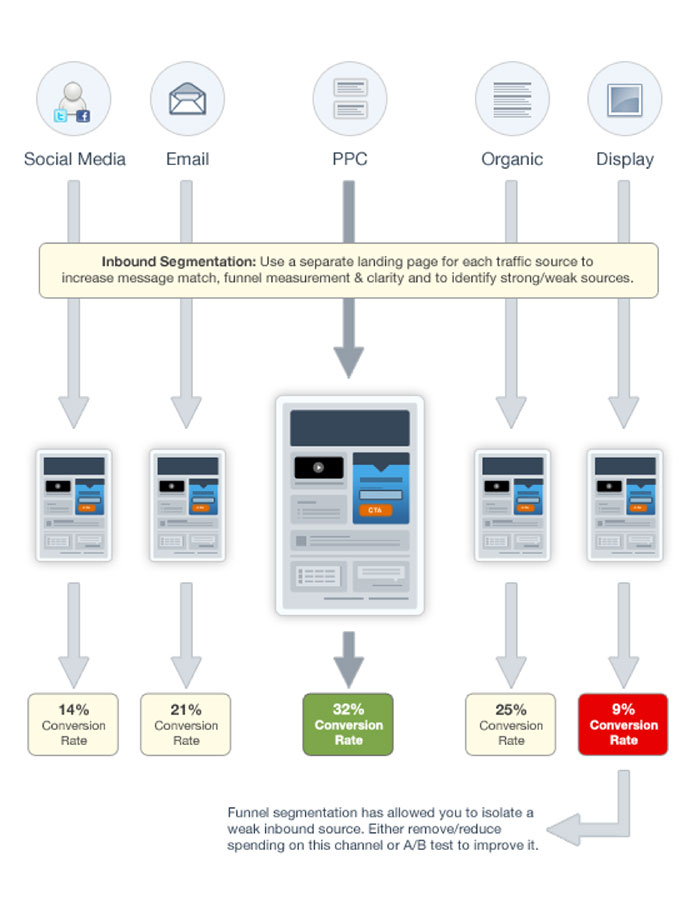 Basically you’re creating a new page (even if it’s a clone or duplicate of an existing page) and dedicating it solely to one specific traffic channel (or offline campaign).

So now, with this proper segmentation setup, you can start to compare the visits, events, or goals completed on those pages and extrapolate to which initial, offline campaigns generated them.

Finally. At laaaaaast you can start to really understand what’s driving those actions back on your website. Phew. So why all the effort and nuance? Because tracking phone calls – which generate substantially more results than online visits – work largely the same way.

Step 2: Track Phone Calls Back to the Campaign that Generated Them

70% of phone calls are driven by digital channels, according to Invoca’s Call Intelligence Index that tracked over 30 million calls.

That’s not the only staggering stat from that report, though. The overwhelming majority of people (75%) agree it’s the best way to get a fast response. And at least half of people who search for a company on mobile devices call, too.

That’s a problem. Because your phone, most likely, just rings. Out of the blue. Out of nowhere. Divine intervention? Perhaps.

But more likely, you’re benefiting from this evolution in consumer behavior. Google’s Customer Journey to Online Purchase tool will show you. Pull it up, select your industry, and you can see how people are discovering companies like yours today: 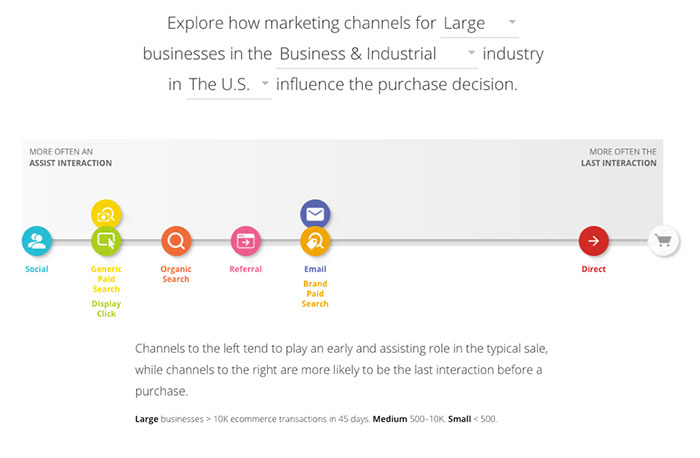 For example, large, U.S. businesses are discovered through a social update, generic paid search (like for a problem or category – not brand), or display click. So people are conducting research, ahead of time, before picking up the phone to dial that shiny, new Grasshopper phone number you’ve got.

How are you supposed to start tracking all of this?

The first, basic step is to setup a new event and/or Goal inside Google Analytics. There’s already a detailed guide on the topic so I won’t belabor the point. (And here’s another excellent conversion tracking guide for extra reading if you’re new to this stuff.)

But your objective is to start registering hard actions each time that number is dialed from your site. 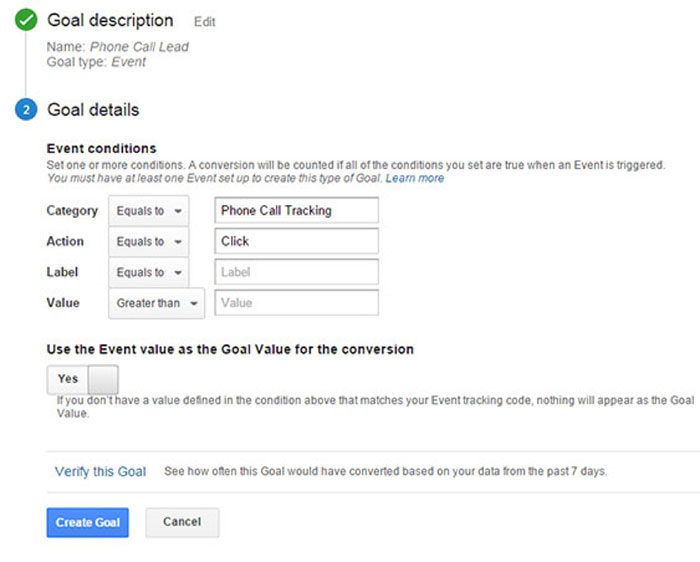 Basic reporting like this is great. It’s a start.

However… it still doesn’t help you determine which of your own efforts (and spending) is leading to these results on the other side.

Remember all that time we invested in learning how to measure offline website visits in the last section? That whole ‘funnel segmentation’ thing? You’re going to do something similar now with phone numbers. Here’s why.

It’s true that Google AdWords, for example, has a built-in call tracking extension. But… someone has to call the number directly from that advertisement (on Google) in order to work.

What happens when someone clicks to the website instead and browses around on your website before calling in? All is lost.

They watch a video, read until the end, and then decide to pick up the phone. If you have a unique phone number on this page, it can be tied back to your Hollywood Medical Software campaign (and the advertising that generated it).

Pro tip: PPC agency KlientBoost reports that, "matching the visitor with an area code phone number that’s the same as theirs, the chances of a phone call double, if not by more."

Awesome. You’re starting to close all of the potential gaps that cause marketing activities to go unreported. But. If you want to completely close the loop of where paying customers are coming from, it’s going to take a little more work. And get a little more complex. (Don’t shoot the messenger.)

Goals and events inside Google Analytics is helpful. Much better than nothing. (Although "nothing" is, admittedly, a very low bar.) But the problem with this data is that too often, it’s merely ‘surface level’ stuff. Recording new phone calls is fine… but what happened on that phone call?

Did they just hang up? Did they just ask for the time? Did they have a detailed question that got routed to the sales team? The point is, phone calls don’t = closed customers. So all of the tracking and reporting about phone calls alone is useless (or at least, not super helpful).

It might also take a few of them before someone finally hands you money, too. A ‘conversion’ is just a single step. For instance, a SaaS app can, and will take multiple: the customer visits, the customer tries out the free trial, then, if all goes well, the customer pays. In that case… which ‘conversion’ are you tracking?

That’s doubly problematic because of some limitations with common analytics programs (like Google Analytics).

For example, you might see an ad for a product you want while on Facebook on your phone. You check it out, and then put your phone down (probably because you’re at work and supposed to be working!). When you get home, you pull up the same item on your tablet, and buy.

Google Analytics can’t always account for these as the same person. So instead, it’ll incorrectly show up as different or unique people.

Let’s say you have two AdWords campaigns. The first generates 10 leads. The second, only five. What happens inside most organizations is that everyone focuses on the first one that generated the most leads. So the first gets more attention, resources allocated (in people working on it), and an increased budget to spend more.

But that could be a grave mistake for a few reasons:

The only way to know for sure, is to make sure you’re tracking those AdWords leads all the way back to successful paying customers.

In other words, if John Smith became a new lead from the first AdWords campaign, you can line up how much he’s spent with you and compare that directly back to what you’re spending on the campaign. #YayROI

One of my favorite is CallRail because of their Dynamic Keyword Insertion. Here’s how it works. You create a ‘pool’ of available phone numbers. Let’s say 8-10. These are all completely unique and will show up for each new visitor at your website. Your Grasshopper phone number would be the ‘swap’ target that these other unique, dynamic ones will redirect incoming phone calls to. 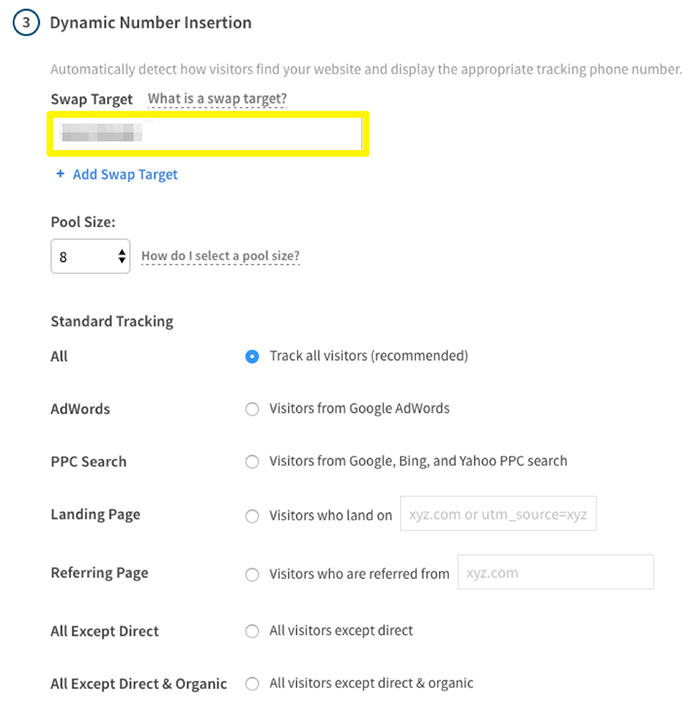 Now when a new visitor arrives at your site, CallRail will automatically switch out your primary website phone number with one of their tracking ones. Here’s how it would look in the top menu or navigation on your site:

This ‘dynamic’ phone number will track the visitor across every website page, too. So if they click around a few blog posts and landing pages before converting, all of that information will be saved against their record so that you can easily track it back.

For example, you’ll get a record of not only who’s calling and where they’re calling from, but also which individual keywords they searched for and landing page they called you from.

Then you can sync this data with your CRM of choice. For example, if you use HubSpot, a new record will be created for people who’ve called in. And if a record already exists with that phone number, it will match the new event with their existing activity. 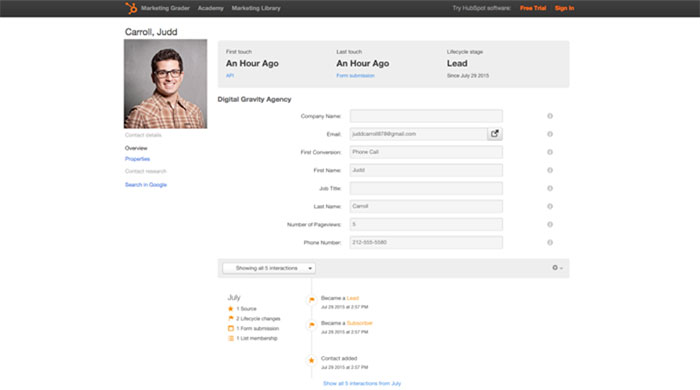 So when that person eventually does sign on the dotted line or purchase a new product, you can see exactly where they came from. And you can measure exactly how much you spent in order to get them as a new customer, too.

The phone just rings. There’s no history or paper trail behind it unfortunately. Same goes for website visits that just show up out of the blue. People come directly to your site without you knowing what sent them there (or even why they’re visiting).

Unfortunately, it takes a lot of extra work to figure this information out. There’s a lot of hoops you need to jump through in order to successfully track offline actions.

It can get a little messy at times. But once you’ve figured out which offline actions are driving online visits or phone calls, and then which of those are turning into closed customers, you’ll discover which of your own marketing and advertising efforts are generating substantial results.

And which are a complete waste of money.

this story is in Marketing & Brands, On a Roll, Small Business, Tips & Tricks with info about Metrics & ROI, Print Marketing