How I Used Kickstarter to Start my Business

by Grasshopper Team — Published in Entrepreneurship on January 10, 2011

Phil Simon, author of Why New Systems Fail, The Next Wave of Technologies, and The New Small shares his experience using Kickstarter to start his publishing business.

In May of this year, I was on an edition of The New York Times’ TechTalk Podcast. I discussed my second book,_ The Next Wave of Technologies_ and at the end of the show, the host asked me, “What’s next? Another book?”

I responded with something along the lines of, “I can’t imagine doing another one but, knowing me, I’ll probably do it again. It’s kind of like a woman having a child. Immediately afterward, she can’t imagine repeating the experience. After a few years, though, the kid is kind of cute and you want another one.”

Well, it didn’t take me long to have my “childbearing” moment. 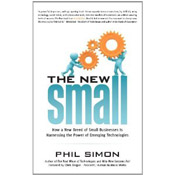 My next book is called The New Small: How a New Breed of Small Businesses is Harnessing the Power of Emerging Technologies. It is about how small businesses are using cloud computing, SaaS, open source, mobility, and social networks to compete with larger organizations. In the process, “the little guys” are creating much more meaningful jobs. What's more, it's a book for budding entrepreneurs.

Long story short: You can be your own boss now. You don't have to wait to be hired.  Create your own job.

To get the book out, I had the option to go with a number of traditional publishers; problem was we didn't agree on price or the release date.

Trust me when I tell you that traditional publishers were interested. However, I decided to start a publishing company for three reasons:

All of this is indicative of the problems facing the publishing industry, a subject which I have written on before. Long story short: I just don’t think that big publishers “get it.”

As you may know, there are different types of self-publishing. I had no interest in using “publishing houses” such as AuthorHouse or iUniverse because quite frankly, I can do a better job than they can. I know this from personal experience and that ship has sailed.

I found out about Kickstarter back in May of 2010 after listening to a talk by management guru Seth Godin. I was intrigued enough to give it a shot. I used the site to raise some of the funds required—e.g., editing, cover design, and production costs. With regard to the latter, I am using Lightning Source, a print-on-demand company that prints older titles from big-time publishers.

The results from Kickstarter were amazing. After about a week and a half, I met 40 percent of my goal! I hit 90 percent after 28 days and hit my goal soon after that.  Of course, it took a great deal more than $4,600 to do the book right, but Kickstarter allowed me to do something else: build social capital with existing and new friends and acquaintances.

In The Shawshank Redemption, Tim Robbins' character says, 'Get busy living, or get busy dying.' I can't put it any better than that. If I can start a publishing company and bring a book to market in five months, then you can overcome whatever is holding you back. Starting a company and working for yourself need not be just a dream.  You can make it happen.

Phil Simon is the author of Why New Systems Fail (Cengage, 2010), The Next Wave of Technologies (John Wiley & Sons, 2010), and The New Small (Motion, 2010). He consults companies on how to optimize their use of technology. When not consulting, Phil speaks about emerging trends and technologies and writes for a number of technology-oriented media outlets. He received a BS in policy and management from Carnegie Mellon University and a master’s in industrial and labor relations from Cornell University.

To learn more about Phil, check out his blog or visit his site.