6 Weird, Niche Companies Making Good Money (And How You Can Too!)

by Sherice Jacob — Published in Entrepreneurship, Off the Ground on May 20, 2014

When it comes to profitable niche markets, many people like to stay with proven, tried-and-true markets… things like finances, health or software. But there are a few bold, adventurous souls out there willing to try almost anything to uncover an undiscovered market just hungry and waiting to spend.

Here are six weird examples of niches that not only fill a need, but have also found a thriving fan base to sell to – and how you can duplicate their efforts (without getting those odd looks when asked “What is it you do again?”)

Market Served: Business travelers who need to be everywhere at once 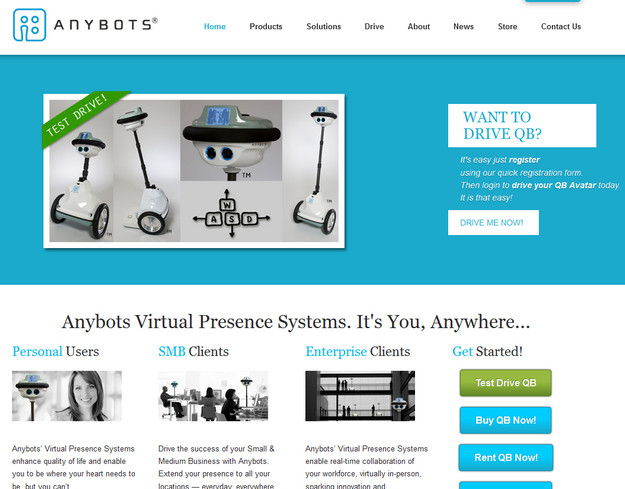 Anybots – The Next Best Thing to Being There?

Let’s say you’re the manager of a variety of enterprises. Your job forces you to travel often to oversee factories, labs, warehouses and offices at every step from production to promotion.  It’s a lot of time wasted, a lot of money spent, and a lot of jet lag to recover from.

That’s where AnyBots comes in. Marketing themselves as “virtual presence systems”, this little camera/scooter device lets you remotely drive around and check out various processes without actually being in place. This new method of experiencing remote collaboration is being coined as “mobile telepresence” and lets the robot’s owner/drive see precisely what the robot sees, anywhere at any time.

In one case study, an AnyBot was used by a child after recovering from a bone morrow transplant. Although the child was confined to his hospital room, the robot enabled him to go to school, visit his friends, and “be there” for his brother’s birthday party.  For business owners, an AnyBot lets them multi-task from wherever they are, and stay up-to-date on new findings, progress and other work without having to travel.

In short, AnyBots has the potential to pay for itself in a single trip, without having to force businesses to rely on email, telephone or videoconferencing when scheduling conflicts and time zone differences get in the way.

What You Can Learn from AnyBots

Market Served: People who want the best of both worlds. 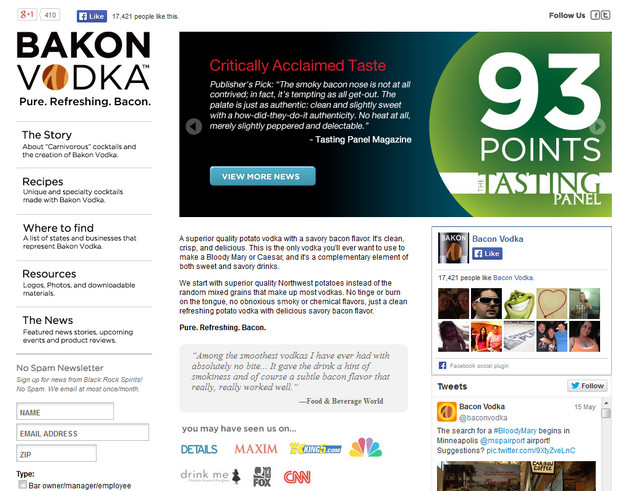 Bakon Vodka is serious about bringing unique flavor to the market

If you’ve been online for any length of time, you already know about the internet’s love affair with bacon. Shirts, keychains and even scented candles have all tried to capture the essence that is baconly love – but few products do it as exquisitely as Bakon Vodka.

Now you might think that bacon flavored vodka breaks all the rules – but after having been featured in Maxim, Fox, CNN and NBC, people are starting to talk.  A 93-point tasting panel was conceived to try and describe the flavor, and as of this writing, over 17,000 people agree:  bacon-flavored vodka is a hit.

And before you think this is a fly-by-night product – Bakon Vodka is in the market for the long haul – laboriously describing their product’s creation process, along with recipes, contests, and more.  Reviewers have chimed in with their own suggestions, ranging from tailgating ideas to cocktail competition winners.

Even Conan O’Brien got on the bacon-loving bandwagon back in 2009 by announcing “A Seattle company is making bacon-flavored vodka…the hardest part of making it? Getting the pig drunk.”

What You Can Learn from Bakon Vodka 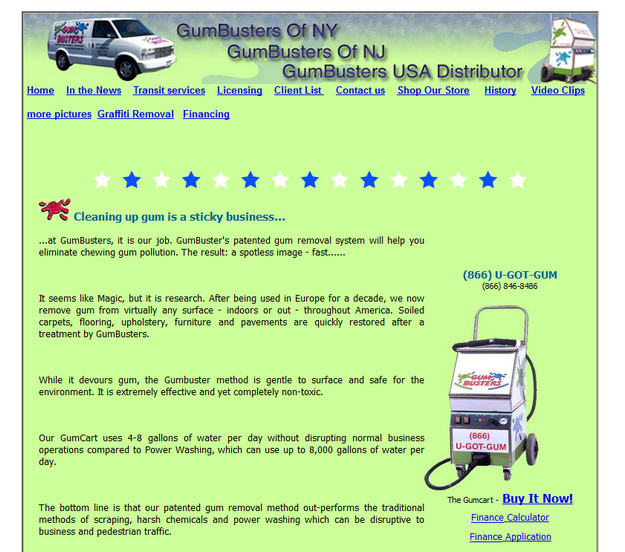 Cleaning up gum is a sticky business

Unless you’re selling the sweet confection, few businesses can be built around gum… but Gumbusters, a company operating in New York and New Jersey decided to tackle this sticky situation in reverse.  With their patented Gumcart, the Gumbusters remove the sticky, soiled substance from carpets, pavement, furniture and more.

They compare their service to traditional power-washing, which can use 8,000 or more gallons of water per day.  In comparison, the Gumcart uses only 4-8 gallons, and no harsh chemicals – meaning it’s environmentally friendly and doesn’t disturb the crucial foot traffic that storefront businesses need to survive.

Gumbusters were featured on the Discovery Channel’s “Dirty Jobs” and have been used by the Long Island Rail Authority and the Smithsonian Institute among others, and simply goes to show how a unique idea in an existing market can turn a problem into profits.

What You Can Learn from Gumbusters 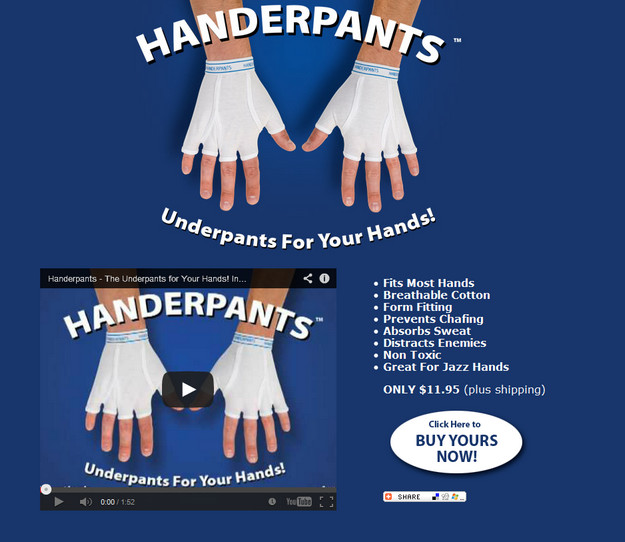 Underwear for your hands

Yes, this really exists.  Handerpants, originally conceived as a gag gift, have actually received some rave reviews on sites like Amazon.  As it turns out, builders, drummers and anyone who uses their hands often find these breathable cotton gloves a great way to keep their more expensive gloves clean, while reducing sweat and chafing on their hands.

For less practical uses, it seems kids love them, as do office workers for the yearly “white elephant” Christmas party.

As much as the old business advice tells you to find a market and then create a product, Handerpants got lucky in that it created a product which inadvertently found a market.

What You Can Learn from Handerpants 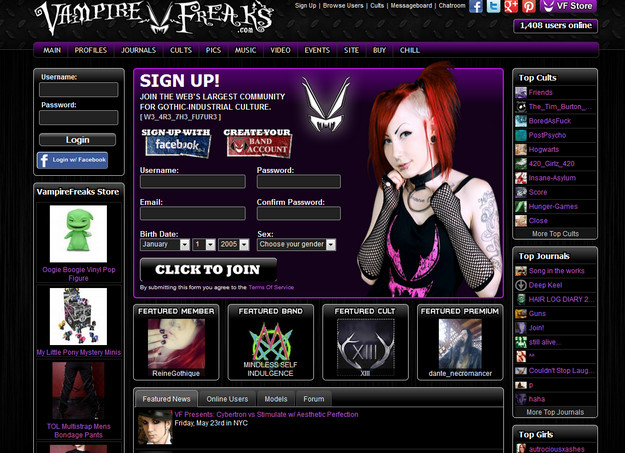 What do you get when you combine safety-pin arm warmers, zombies, zippers and skeletons?  Something like Vampire Freaks – a social networking site for all things gothic.  Bands and regular users alike make up the site, with different members able to rate each other, share music and videos.  Both groups can also make use of journals, which are a blog/Tumblr crossover.  Finally, there are Cults, which are similar to social media groups like Facebook groups and can be created around a band, location, movie or hobby.

There are a variety of products (both branded and specialty) available for sale as well as premium subscriptions, which let you upload more photos and let you see who has visited your profile lately. Premium users can also search for members by specifics (age, gender, location).

What You Can Learn from Vampire Freaks 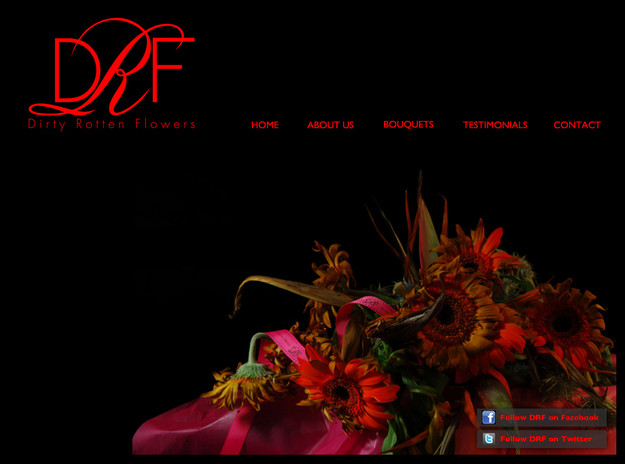 Let DRF say “Thank You” when you really want to say “thanks for nothing!”

Got dumped? Cheated on? Dirty Rotten Flowers is the way to say “you care”, in that “you could care less”. Featuring such morbid bouquets as the “Morticia” and the “Bad Lay”, a bouquet of dirty rotten flowers is a gift they won’t soon forget.

Just reading through some of the testimonials instantly shows you how such a market could really thrive. There’s no card section for “I ran off with my yoga instructor” at your local Hallmark – so letting your real feelings show with flowers is a great way to say what’s on your heart without ever speaking a word.

What You Can Learn from Dirty Rotten Flowers

So How Do You Do It?

You might not think that these specific niche markets have anything in common, but if you look a little closer, you’ll see there’s a common thread. All of these markets have looked at a typical niche site – and asked themselves “what can we do differently?” or “what’s the real problem that isn’t being solved?”

Even if you have a mainstream competitor that's making good money – think Facebook or 1-800-FLOWERS, there’s still no reason to shy away from your idea. Vampire Freaks gives like-minded individuals a place where they can connect, chill out and share interests – but in a way that’s safe and welcoming.

Whether you want to start your own social network or create a product that’s the highlight of the annual office gift exchange, these niche sites prove that anyone can do it and still tap into a thriving, hungry, eager-to-participate market.

this story is in Entrepreneurship, Off the Ground with helpful hints for your entrepreneurial journey.