CNN Pipeline Anchor Nicole Lapin gets to know young people who are getting an early start on doing incredible things in a new CNN.com series, Young People Who Rock.

A lot guys in their early twenties are out partying all night and “figuring it out” during the day. But not 24-year-old David Hauser and 25-year-old Siamak Taghaddos. These young entrepreneurs are seizing the day and the night.

David and Siamak founded GotVMail, a company based in Boston that basically makes the small business owner look like a really big deal by providing them sophisticated, personalized voicemail service. Catering to the little guy has made the GotVMail guys big money. The company has been profitable since its second month.

David and Siamak met when they were undergrads at Babson College, a school known for turning out entrepreneurs. They both started their own companies in high school. They don’t sleep much now and didn’t sleep much then—but, then again, who can when you’re busy seizing your youth? 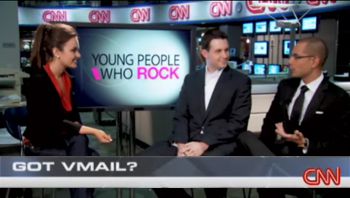