You Helped Us Get NED Passed By The President, Now Let’s Get It Passed By Congress 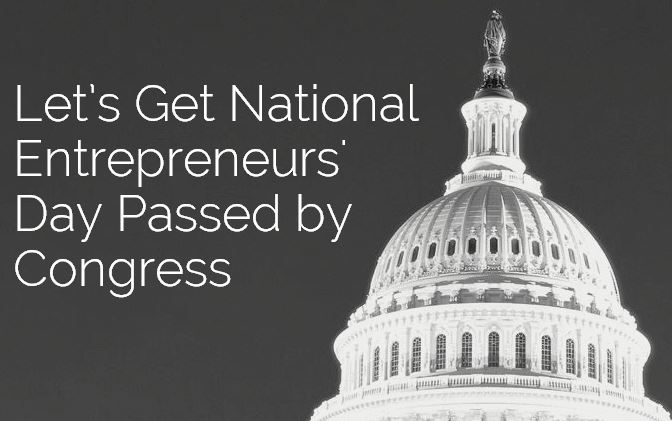 In May of 2010, David and I, along with thousands of supporters, successfully petitioned the President to create a National Entrepreneurs’ Day. We couldn’t understand why the most entrepreneurial country in the world didn’t have a day to recognize entrepreneurs.

Currently, National Entrepreneurs' Day has been a presidential proclamation each year, meaning it’s recognized by the White House but not an official day like Father’s or Mother's Day.

Last fall, after a year of working with various organizations to make National Entrepreneurs’ Day official, bipartisan legislation 401 was introduced to Congress with 26 original cosponsors (representatives who signed on before the resolution was introduced).

At that time, we began petitioning Congress to get National Entrepreneurs’ Day recognized as an official holiday every year, from here on out. We had tons of people gather to support the cause, and now it's time to push Congress to pass our bill!

You helped us get #NED past the president, now let's get it passed by Congress and make it an official day.

To learn more about #NED and to vote YES on H. Res. 401, please visit http://VoteforNED.org.

this story is in The Hopper with helpful hints for your entrepreneurial journey.