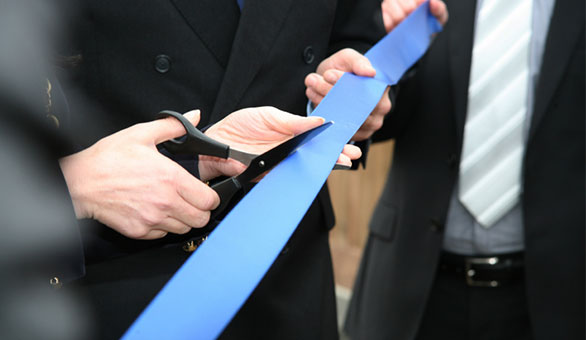 This post is part of our 10th birthday celebration. Stay tuned every month for fun posts, like this one, contests and more!

In the world of tech, a decade is a heck of a long time, and that's an understatement. In 10 years, for instance, Facebook went from a college dorm project to a massive public company. In hindsight, the transition makes total sense, but at the time, who knew?

Had you heard of Facebook back in 2003 when Mark Zuckerberg was creating the first iteration of his platform? Probably not. At the time, could you have imagined that you'd eventually be browsing Facebook on an iPad? If somebody said all of this to you, you probably would have laughed.

And now? Facebook and the iPad are core components of your everyday life, and in 10 years, social networking and tablets will probably still be your most important tools.

In honor of our 10th birthday, we've rounded up some fellow companies that are celebrating their first decade with us this year.

2. DocuSign This cloud-based electronic signature technology has transformed user authentication and identity management online. It's one of the core reasons why you can get signatures on documents in minutes instead of days via snail mail. Today, the platform has support for 39 different languages and is influential in key industries including finance, healthcare, high tech, higher education, recruiting, life sciences, and real estate.

3. Delicious Delicious was one of the first social bookmarking sites on the web, and it's still around! Today, they're owned by AVOS Systems, which is working on getting the platform integrated with Facebook, Twitter, and LinkedIn.

4. LinkedIn LinkedIn transformed the concept of professional networking and recruiting online when they launched. What started as a big idea has now become a robust, publicly traded company with 200 million registered users in more than 200 countries and territories. Talk about an amazing success story.

5. eBuddy For the last 10 years, this mobile instant messaging solution has kept smartphone users connected. Believe it or not, the app was the result of a bet — the company's founder was challenged to create a mobile version of MSN Messenger. He did it, and then he extended the idea to build a platform for virtually every type of instant messenger. Today, it's still a robust company.

6. oDesk This company created one of the first online marketplaces for freelance talent. The platform allows clients to create virtual work teams with high-demand skills. As of today, the company has raised four rounds of financing and has more than 170,000 providers in its network.

7. Redbox It seems like only yesterday when those movie rental kiosks started popping up at your neighborhood supermarket. Ten years later, Redbox is still around with more than 42,000 kiosks at over 34,000 locations. In 2012, Redbox purchased former competitor Blockbuster Express (remember them?). Today, it's one of the largest video and game rental companies on the market.

8. Skype You must be thinking 'wow, Skype is already 10 years old?' Believe it or not, the first release was back in 2003. Since then, the company has kept on growing. Today, the Skype platform has more than 600 million users. In May 2011, Microsoft bought Skype from eBay for $8.5 billion. In 2013, Microsoft will be phasing out its Windows Live Messenger in favor of Skype. The transition will be complete by April 30th.

9. Tesla Motors This is the company that is responsible for transforming the automotive industry. This Silicon Valley company designs, manufactures, and sells electric cars. Today, it's a public company that earns more than $204 million in revenue. Car enthusiasts might be excited to hear that Tesla is working on a vehicle that caters to the mass market. Its starting price will be $30,000.

10. Skullcandy This Park City, Utah-based company markets headphones, ear phones, hands free devices, and other audio players. Its target consumers include outdoor sports enthusiasts, skaters, and snowboarders. You may have heard of them, but did you know that it's a public company? With a reputation for selling 'the world's coolest ear buds', Skullcandy's revenues have passed $100 million — a huge feat to accomplish in less than 10 years.

There you have it — 10 companies celebrating their 10th birthdays along with us this year. Which ones have surprised you most?