Should Startups and Small Businesses Pay Attention to Reddit and Snapchat? What You Need to Know

These days, most social media advice for small businesses really translates as advice for using Facebook and Twitter.

Are you as sick of hearing about those two platforms as we are?

There’s no doubt that businesses can leverage tremendous value out of those two behemoths. But what about other forms of social media—social media that has just as much traffic, just as much “viral-fuel” potential, but less overall competition?

If you’re not familiar with these two, don’t fret. They’re easy to learn.

In this post, you’ll not only learn what they do, but the right way to use them for your own small business.

The Newb’s Guide to Snapchat

Snapchat is an app that people use to send pictures to one another on their smartphones.

You might be thinking “well, why would anyone use that? There are plenty of ways to send photographs.”

True. But Snapchat’s innovations include ease of use, customization, and time limits.

Snapchat allows the user sending the photo to attach a “self-delete” feature along with the picture. After some period between 1-10 seconds, the photo is removed from the receiver’s phone and deleted from the Snapchat servers.

This might seem like an odd platform for businesses to market to their customers, but there's so many people on Snapchat (especially in the younger demographic) that companies have begun experimenting.

McDonald’s is one such company-- the fast food giant attracted users to its Snapchat account with two key steps:

McDonald’s simply asked its followers to add them on Snapchat by providing their username (mcdonalds) with the promise of surprises to follow—or, as McDonald’s put it, a “tasty surprise.” 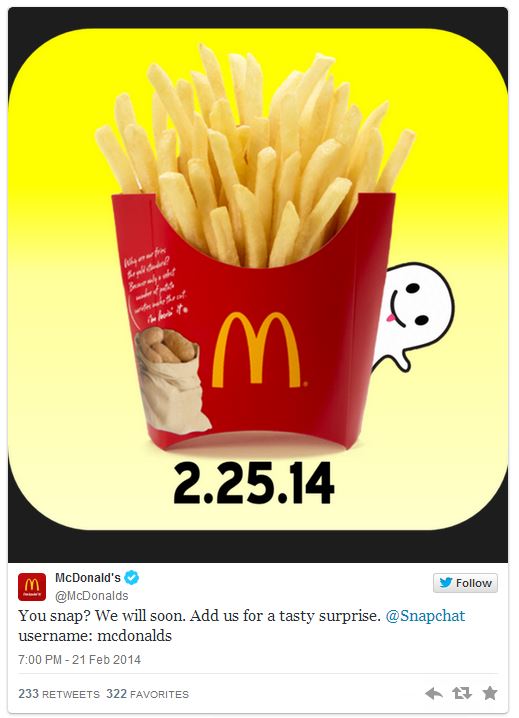 Using Snapchat to offer “behind the scenes” material.

McDonald’s had an agenda—rolling out a new sandwich—but didn’t spam its Snapchat friends with advertisements. Instead McDonald’s offered unique behind-the-scenes content including a picture of celebrity endorser LeBron James. 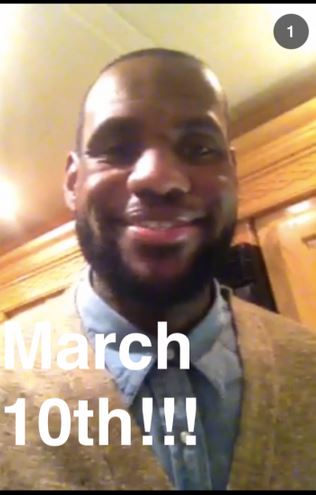 You have to admire McDonald’s for its simple approach: giving out its Snapchat profile username and then offering some cool exclusive content. Snapchat is simple to use, so don’t let your unfamiliarity with the platform prevent you from exploring its full potential.

How Businesses Can Use Snapchat

Because Snapchat is such an unconventional platform, it's easy to use it to separate your business from the crowd.

Notice that McDonald’s didn’t really have a specific goal in its Snapchat campaign other than to raise awareness for its new product unveiling. The New Orleans Saints ran a similar campaign during the 2013 season, offering its fans behind-the-scenes looks at locker rooms and apparel that the team wasn’t sending out anywhere else.

It is, after all, the short lifespan of each picture that makes Snapchat unique. Because each picture only has a small shelf life, there is something inherently “special” about each picture sent. A Tweet can live on forever on a Twitter profile, but a Snapchat photo only sticks around for a hot minute.

Rather than try to mold Snapchat into a new form of Twitter, successful companies recognize Snapchat for its individual strengths and weaknesses as a platform. It is the ideal way to send out “exclusive” content that you can’t find anywhere else.

How can your small business emulate big brands like McDonald’s?

Reddit, the self-advertised “front page of the Internet,” is essentially a digital white board and message board populated by millions and millions of people.

Reddit users post everything from original content (“Check out this photo I took!”) to Internet memes (in fact, there are entire “subreddits” dedicated to them) and much, much more. Think of Reddit as something of a large collection of message boards, where a voting system keeps the cream of the content (and the comments) rising to the top.

Thanks to Reddit’s popularity, the idea of seeing your link getting to the top of a specific subreddit—or even the whole site in general—is very enticing. In fact, Imgur.com, a simple image hosting site, started simply because one user had the idea to create a single webspace to host all of the images constantly being uploaded to Reddit.

Reddit is an amalgamation of its varying subreddits, usually denoted with the prefix “/r/.”

For example, “Reddit.com/r/nfl” is a popular football fan site where fans of different teams discuss the news, upload breaking stories, and indulge in a healthy bit of trash-talking.

“/r/astronomy” is a similar space for astronomy buffs, and so on.

If this concept doesn’t sound powerful at first, you may be underestimating the site. When your link is “upvoted” by enough users, its visibility can ascend to anything beyond you’ve been able to achieve in your own marketing efforts. But if you want to get upvoted, there are a few rules you’d better be ready to follow first.

Because Reddit is so democratically-controlled, the key point you need to remember is that if you aren’t satisfying the users, your link won’t get noticed. It might even get “buried” by downvotes into obscurity.

Avoiding these downvotes is relatively simple, as long as you can stick to a few principles:

Getting the Most Out of Your Online Marketing

If there’s any one principle to stick to in online marketing as a small business, it’s that you have to create something of unique value.

Internet users have become savvy—even a little cynical. They want to be engaged and entertained, but they’ve sifted through so much content over the years that they’re jaded by the usual spam and blog post.

If you can create something unique while conforming to the structure of media like Reddit and Snapchat, your small business will stand a good chance at reaching a whole new

Your Turn: Have you tried using Snapchat or Reddit for your small business? Will you? Any tips and suggestions for those getting started?

this story is in Off the Ground with info about Social Media, Word of Mouth, Branding