Real-Life Social Media Blunders You Have to See to Believe (And How to Avoid Them!)

by Sherice Jacob — Published in Getting Started on January 26, 2014

It’s easy to look at insane marketing blunders from big companies (Ikea Saudi Arabia digitally removing women from their ad) and organizations (this PETA ad hinting at domestic violence) and think “I’d never do that with my marketing!” But even the most responsible, careful entrepreneurs can end up making some facepalm-worthy mistakes, especially on social media.

But don't let the possibility of messing up stop you! Social media is the perfect way to connect with your customers-- you just need to do it in the right way. That's why we've coupled four exceptionally bad ideas with things you can do instead. 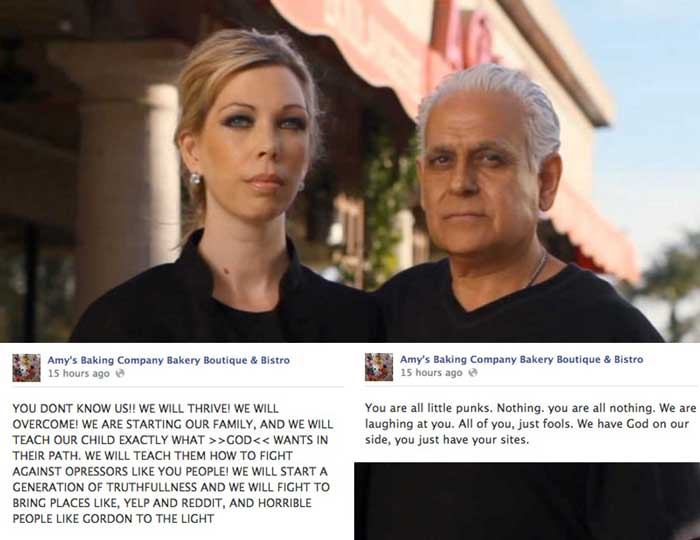 Nearly everyone in social media has heard about the epic meltdown of Amy’s Bakery as a result of their appearance on Gordon Ramsay’s Kitchen Nightmares series.  Facebook, Reddit, Twitter and Yelp all pounced on the fledgling site, causing the owners to leap to the defensive, then feign being hacked, then circle back to religious superiority, all while ripping decadent dessert images off of Google images and passing them off as their own:

The reaction from Amy's Bakery doesn't do much from their public image (it doesn't make me want to try their scones!) They would've been better off coming clean and admitting they were wrong.

DO Learn From the Experience and Admit When You’re Wrong

Nearly every company, large and small, has made a faux pas at some time or another on social media. The important thing is not to become overly defensive, but rather learn from the mistake and take steps to make sure it doesn’t happen again.

Case in point – Epicurious thought it could connect itself to a tragedy by tweeting out sale messages relating to the Boston Marathon bombing: 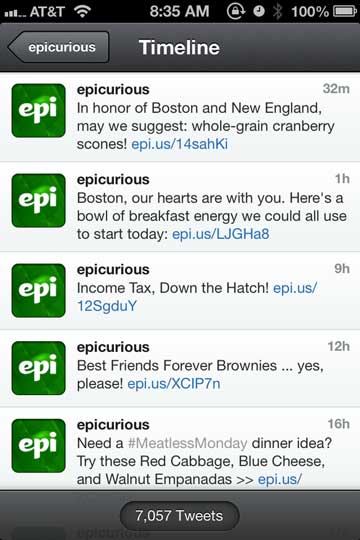 After a backlash erupted on Twitter due to the insensitive tweets, Epicurious took control of the situation and apologized: 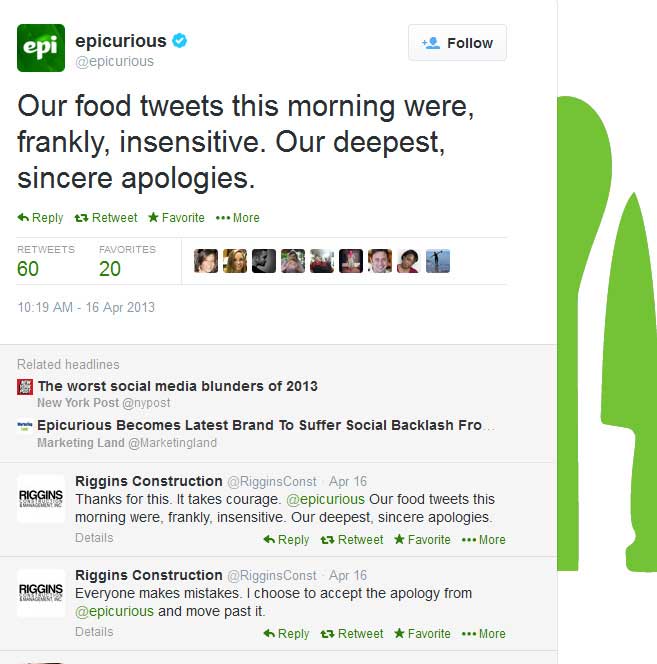 And although an apology won’t bring all of your followers back, the ones that matter will understand that everyone makes mistakes and will continue to remain loyal to the brand you’ve built.

DON'T Shift the Blame to Your Customers

If a customer has a serious issue with the quality of your product, do you:

a)      Take it back, no questions asked, and work on fixing the mistake

b)      Blame the customer and advise them not to use it.

If you said a), you’re like most common sense business owners.  If you said b), you share something in common with Lululemon, maker of pricey yoga pants. 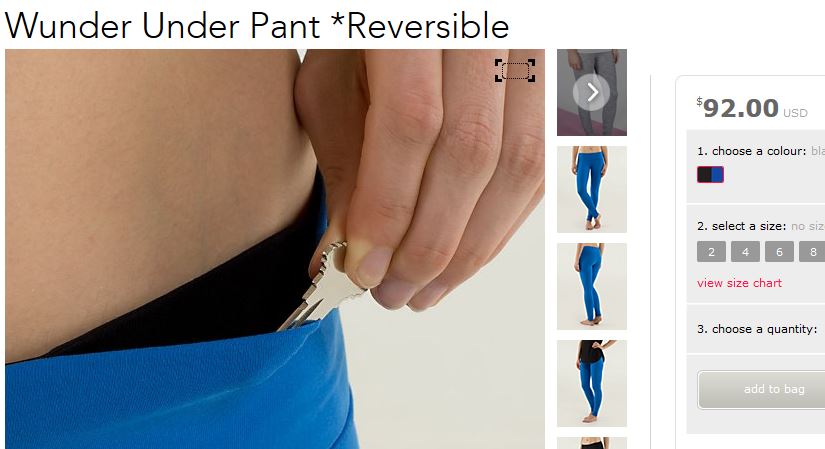 At $92, you’d expect these pants to offer reliable quality and coverage, but when women started complaining about the pants being too sheer and piling, the CEO (who has since stepped down and now serves as chair) remarked: “They don’t work for some women’s bodies.”

And if you wanted to give the guy the benefit of the doubt when it comes to making remarks about women's bodies, he sticks more of his foot in his mouth by following that statement with: “It’s really about the rubbing through the thighs, how much pressure is there over a period of time, how much they use it.”

And the former CEO wonders why their stock prices are falling.

Note: Your products probably aren't right for everyone. For example, your services might be better suited for other businesses, rather than for individuals. But if you exclude people based on weight, gender, sexuality, religion, or anything else controversial, you are likely to see serious backlash.

DO Show Support for Things that Matter To You

No matter what your personal beliefs are, topics like religion, sexuality, and politics are a warzone for brands. Barilla pasta made news last year when its CEO refused to show any gay couples in their ads.  While he later offered a video apology to those he offended, it didn’t take long for other pasta companies to take a stand and show off their inclusion. 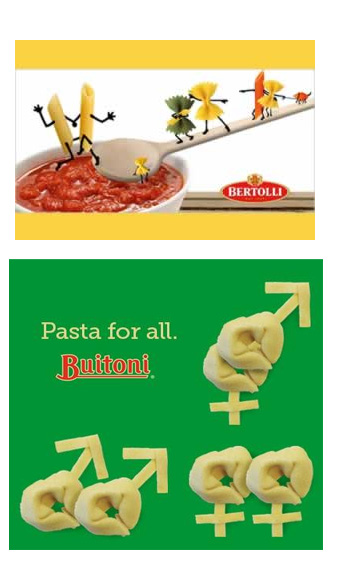 As a brand, you have to be extremely careful of embracing one group only to alienate another. It’s a fine line that most businesses simply avoid. Still, if your competitor happens to step in it and you feel really strongly – most will applaud you for proclaiming your support.

DON'T Be a Social Media Robot

Apparently, someone replaced the social media professional at Kmart with a robot on Thanksgiving day.  After tweeting that the store would be open on the holiday, a day when many companies and organizations are closed, Twitter users took to the screen to voice their outrage: 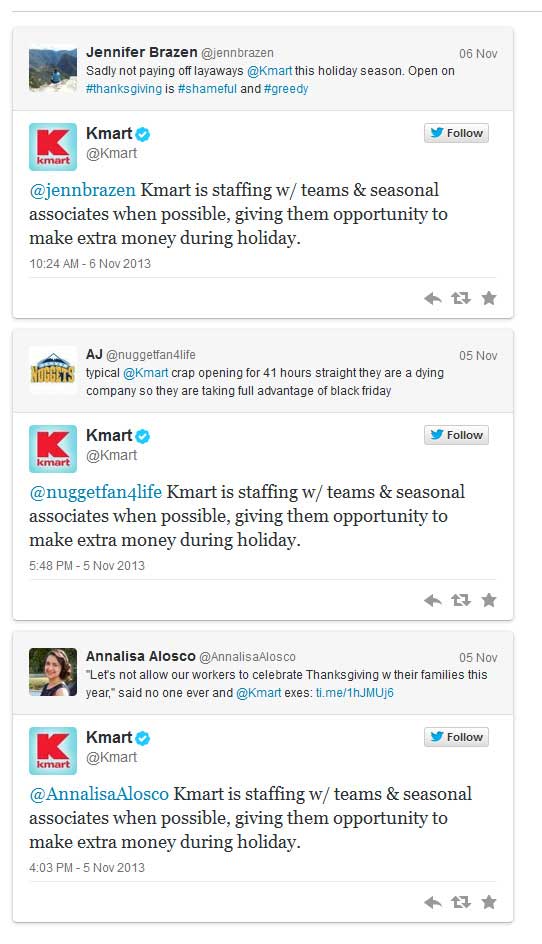 Kmart responded with the same robotic tweet to over 100 messages from their customers.  Maybe they let their social media wrangler have the day off, but asked associates to work? Yikes.

DO Act Human and Sociable

Have fun with social media. Don’t be afraid to embrace the human side, as Starbucks did with their Frappucino #sipface campaign – encouraging people to snap a picture of themselves sipping their drink and tag it to potentially appear on the Frappucino website. 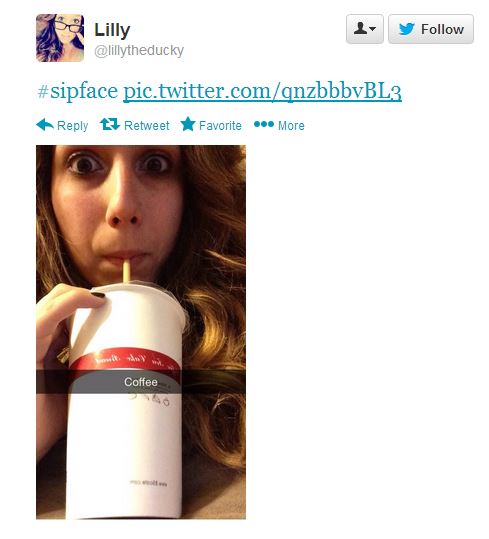 Would the reaction to Kmart’s news have been any calmer if they had profiled some of their employees who chose to work on Thanksgiving, perhaps featuring them with something special they’d were saving to buy for the December holidays? Likely so. But a monotone, robotic response simply won’t assuage an upset customer.

DON'T Create a Hashtag Campaign without Thinking it Through

When JP Morgan decided to have their vice chairman take over their Twitter feed to answer questions for an hour, they tweeted out to followers to send in their questions early using the #AskJPM hashtag.

Unfortunately for JP Morgan, they discovered exactly what their followers thought of them: 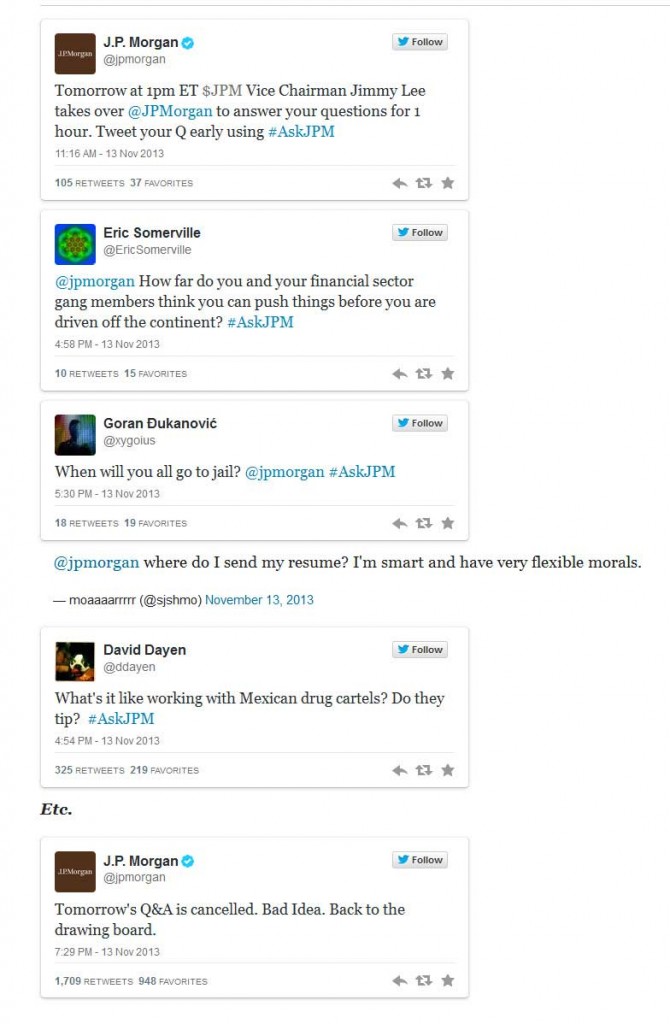 JP wanted to connect with the community, but the decision-makers didn't think it through. Oops.

DO Create Something Out of Nothing

Consider the straw.  It’s pretty uninteresting by itself… flexible, perhaps, but not much else.  But with a little imagination, you could create something with it that was pretty… #strawsome!

That’s what Starbucks did with their #strawsome campaign, inviting users to create art from its iconic green straws – and customers delivered!

Think of something you use every day at your business – what are some ways that you and your followers could turn it into something more interesting and creative?  You may be surprised at what you (and they!) come up with!

Social media blunders are an unfortunate possibility in our always-on, on-demand modern age.  But with a little common sense, you can sidestep the big mistakes and get people talking about your company, in a good way!

What are some of your favorite social media facepalm moments?  Share them below in the comments!

this story is in Getting Started with info about Social Media, Word of Mouth, Marketing Campaigns & PR Stunts