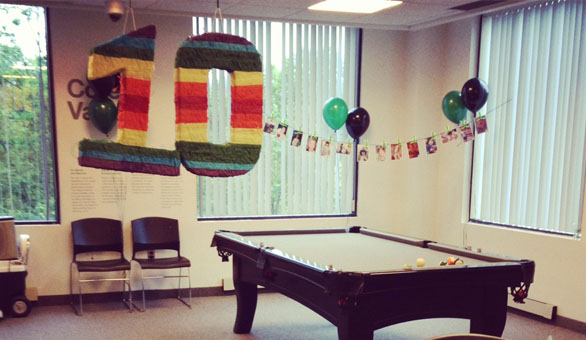 On Friday, we officially celebrated our 10th birthday! Leading up to the big day, we did 10 days of giveaways on Facebook as well as in the office. However, in the office, in order to be entered to win one you had to play our silly games. Channeling our inner 10 year old self, we did everything from trivia, to pin the tail on the donkey and even had a hula hoop contest!

One of the best parts of the party was our childhood photo guessing game. We had the team submit a photo of themselves from when they were 10 (or close to) and then had everyone guess who was who. It was harder than we thought, but fun to watch everyone try and figure it out!

In our opinion, it’s not a party without a piñata! But we couldn’t just have any old piñata stuffed with candy so we hid 10 little bugs in the piñata, each worth a $10 gift card. This resulted in some serious competition especially because one bonus bug worth a $100 Amazon gift card!

The day ended with pizza, cake and a brewery tour at Harpoon Brewery! The brewery tour was a bonus because we had some out of town team members in town, but we're not complaining about it!

All in all, it was a fun day! Check out all the photos from our birthday bash here >>